Wow, it is hard to believe it has been over 5 years since my last post. I've been really busy supporting our family for about the past 6.5 years and there has been precious little time, or inclination to be perfectly honest, to keep this blog going. A lot has happened in those years. Here's the rundown:

1) I got my business, The Oliver Weston Company, really up and running in a significant way. No more fitting in the cooking in the middle of the night, no more keeping stacks of jars an arms-length away in our hallway (ahem).

2) We had a third child, Figaro Berry Corvera, on May 12, 2014. (Yes, the middle name is in honor of Wendell Berry who I will never cease to admire and revere.) Figgy was born at 29 weeks after pretty much kicking his way out and that whole experience was a bit earth-shattering for me (more on that later, maybe).

3) We moved out of Brooklyn and up to the Hudson Valley. It is a whole different world up here, folks!! I still feel like a transplanted city person even though I was raised in Rensselaer County (so I never was a genuine New Yorker); but it is so comfortable and civilized here that I wouldn't trade it for anything. Sad to say, I've lost my edge. Gone is the youthful gal who would happily schlep dozens of pounds of composting material on the subway with a baby strapped somewhere on her body. (Actually, maybe that's a good thing, that girl could be exhausting! Now I exhaust myself in different, more serious ways. :-/) 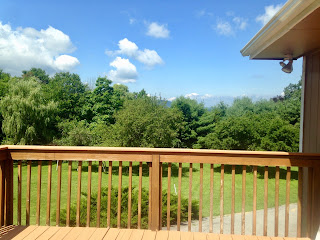 4) We bought a house four years ago! Like a really nice, lovely grown-up house with lots of flowering shrubs and Irises, daffodils, mums, etc. that come back year after year. It will never cease to amaze me. Above is the view from our deck. It's still unbelievable after living so long in a 1-br with two and then three little boys...! (My undying gratitude to my mother who loaned us the money for the down payment and closing costs. We would never have been able to do this without her help.)

5) Two years ago I got my very own kitchen in Red Hook, NY, a cute town with a good vibe. I have an awesome team of women working with me and that is all REALLY good. I feel super lucky.

6) I've gotten back into social dancing, something I used to do a lot before having children. (In fact, I may make it down to the city tomorrow for the monthly fusion dance aptly titled Melting Pot.) Why do I mention this in a list that includes buying a home and having a child? Because dancing is so very important to me and right now my only way to completely get out of my head and into my body. In other words, it keeps me sane.

7) The kiddos are now 10 (almost 11), 7.5, and 5. WHAT?! Hugo and I are moving into our middle years (I am nearly 38 and he is 44) and I find that largely I have become a person who works a lot and worries even more. Or rather, I try to wrap my brain around whatever issue presents itself and pretty much never let up. Hanging out with the kids can bring back my silly side which is a balm to my soul. The last five years have been momentous so many times over. They feel meaty and rich, but they've been hard too. Really really hard. Which I guess is why I stopped blogging.

I've been thinking quite a lot lately that I want to write essays about restaurant culture, the place of food in society, how to cultivate a love of eating and preparing food that is so intrinsic to your being that it is simply there all the time. At some times I think I have a lot to say and at others that it's probably paltry and could be summed up in eight or ten bullet points. But looking back at this blog it feels like maybe there is still a lot. It's different now -- I've had to grow up and take on a lot of responsibilities and quit f*cking around with things that take all my time and don't earn any money -- but my essential passions have deepened considerably. I also miss this outlet and letting my humorous side have its say.

Meanwhile, here is a photo of Figaro having quiche one day in January of last year, making an intentionally diabolical face for the camera. This kid is something else. 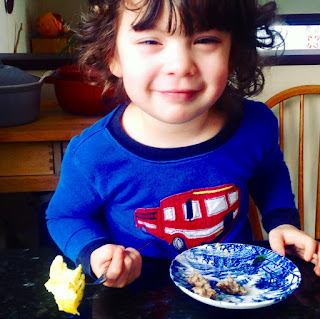 Posted by Hannah Springer-Corvera at 11:54 PM No comments:

Things kids can do while you're cooking

I just came across this draft, and really don't know why I never posted it. The pictures are so outdated (from early spring through summer 2012). Enjoy! 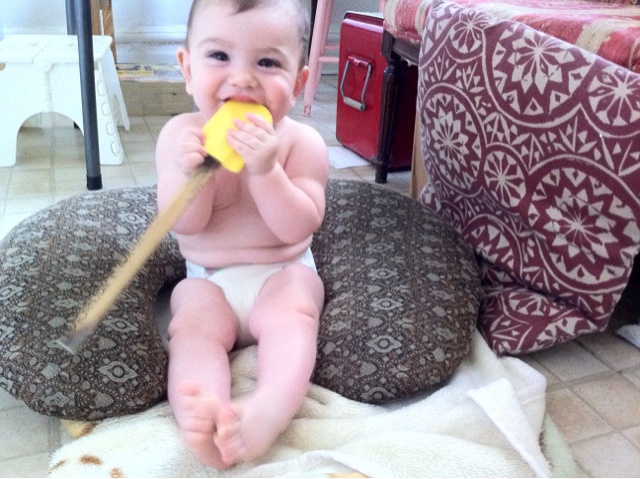 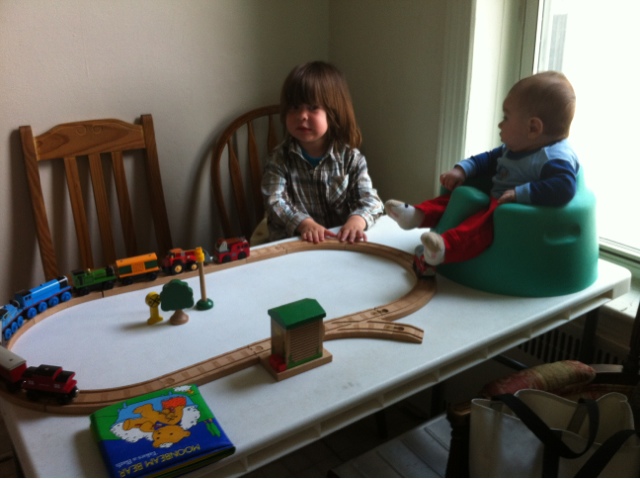 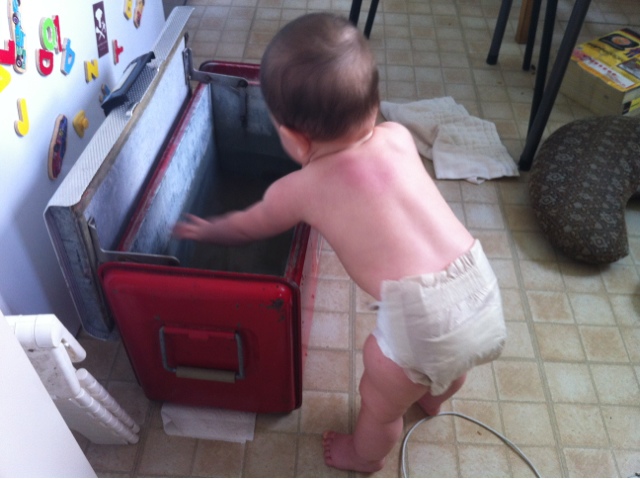 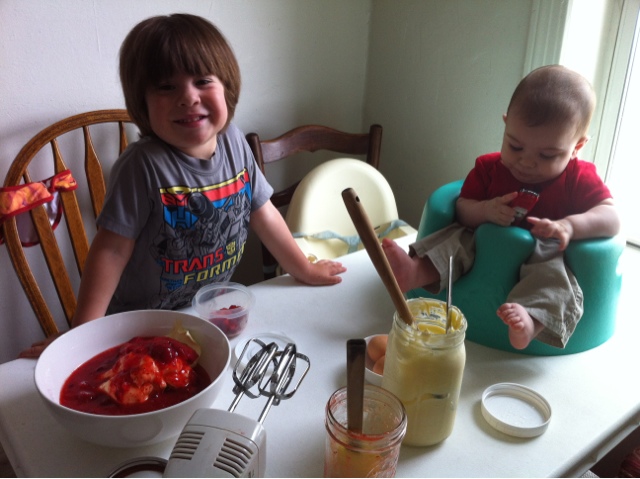 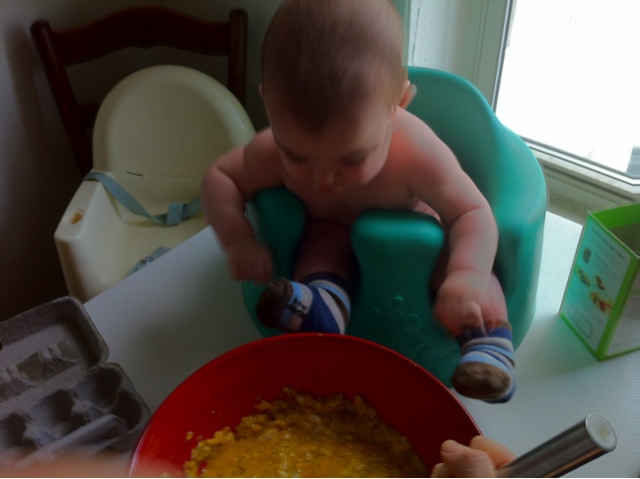 Posted by Hannah Springer-Corvera at 4:03 PM No comments:

I recently discovered that Weston loves eating marrow bones! We buy the small beef marrow bones from USWellnessMeats.com. They are about a 3/4" cross section of bone surrounding a nice amount of marrow. You can take a couple straight from the freezer and bake in a toaster oven at 350 degrees for about 3 minutes. Remove, sprinkle generously with garlic powder, salt, and a little pepper, then bake 1-2 more minutes.

Cool for a minute or two and then serve with baby-sized spoons. Weston digs most of his out himself and then I help him with the rest. I also sprinkle on more salt as he digs down below the top layer.

For adults, a strongly-flavored sauce like garlic pesto cuts the extremely fatty flavor of bone marrow. Remember to eat it hot because once cooled it congeals quickly! 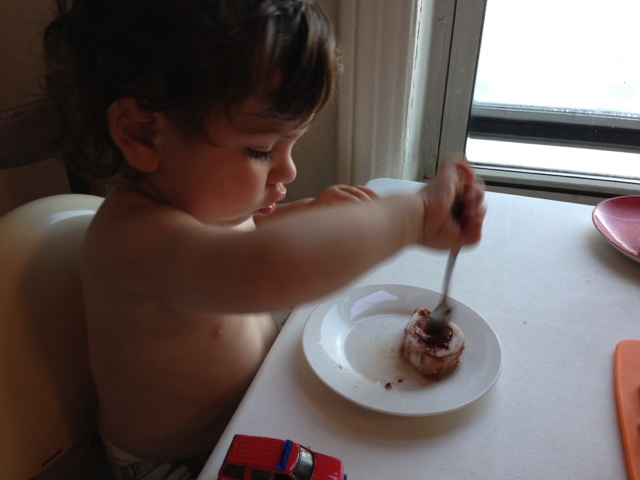 Posted by Hannah Springer-Corvera at 7:04 PM No comments:

Recently Hugo made our favorite family pancakes for Oliver's breakfast while I was at the farmers' market, and when I got back there was one left. I tasted it and asked, "where's the banana?" The recipe calls for 3 eggs, 2 tbsp nut butter, and 1 ripe banana....but the banana hadn't made it in there. The resulting thin crepe-like pancake was flexible and tasty -- and not too eggy! I added some homemade garlic-thyme yogurt cheese, a few strips of leftover bacon, and some fermented veggies, and wrapped it in aluminum foil for later. It made a surprisingly enjoyable snack!

I've made this a few times since, with a little extra cashew butter and salt. You can make about 4 thin crepes using 3 pastured eggs, 3 pinches of salt, and 3 Tbsp nut butter (I like homemade cashew butter made from soaked and dried organic cashews). Combine and blend in a food processor or blender. Pour the batter into a hot skillet coated in bacon fat or coconut oil to cook. Add grated cheese and a few strips of cooked bacon after you flip each crepe. Then top with shredded fermented veggies, roll up, and enjoy! 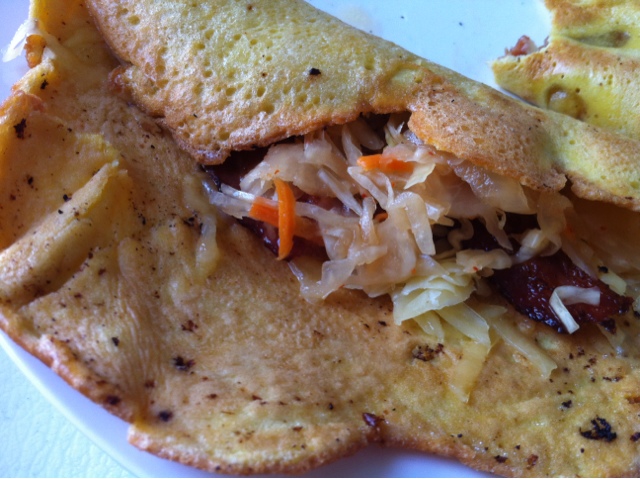 Posted by Hannah Springer-Corvera at 10:42 PM No comments:

Recent Weston pics from the iPhone 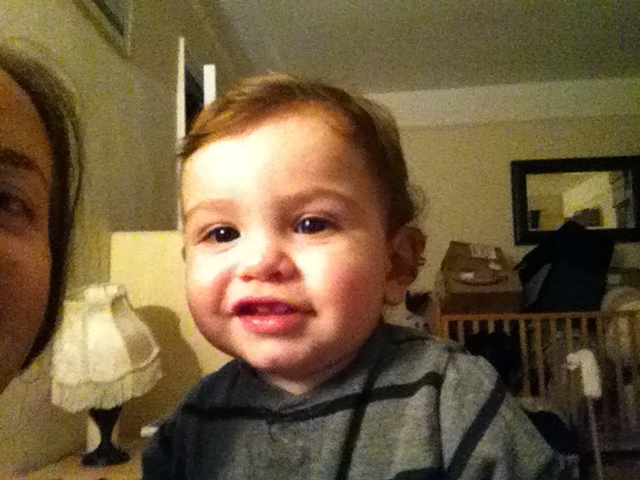 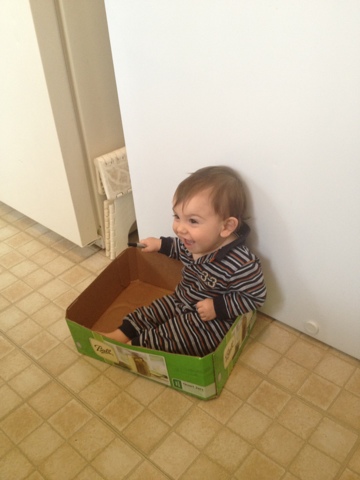 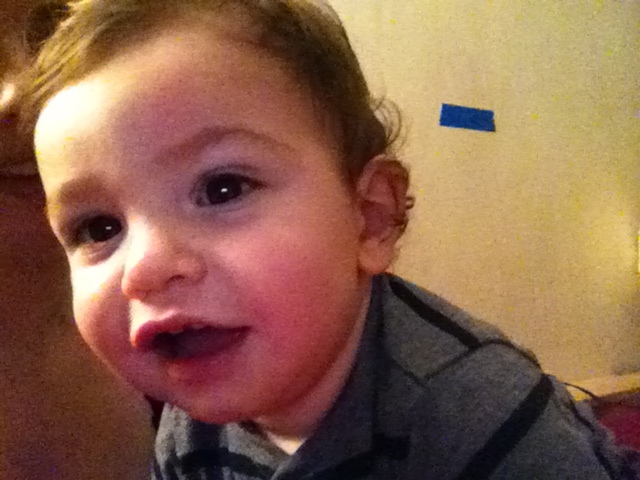 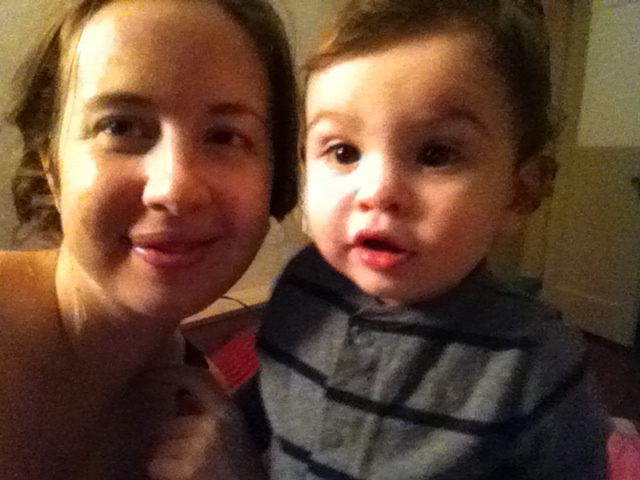 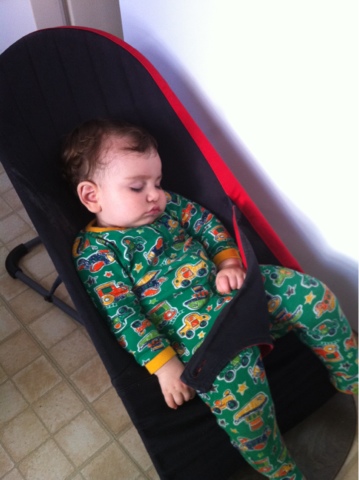 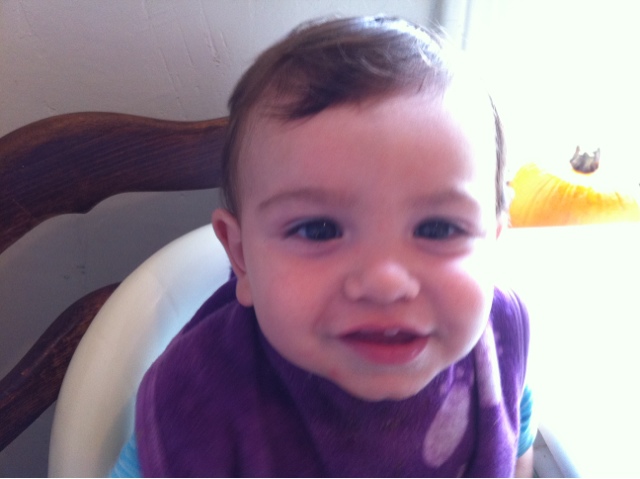 Posted by Hannah Springer-Corvera at 12:00 AM No comments: 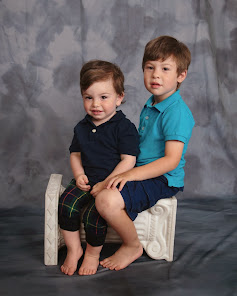 Hannah Springer-Corvera
Bay Ridge, Brooklyn, New York, United States
After years of eating a low-fat high-carb diet I discovered the work of the Weston A. Price Foundation and spent a year radically changing my diet, how I prepared food, and how I shopped. By the following summer every one of the health issues I had regarded as "normal" had disappeared. Even better, our two boys, Oliver and Weston, are healthy, happy, and such a delight! I love sharing what I've learned about food and health, and the wise traditions of isolated "primitive" cultures, with my blog readers, nutrition clients, and cooking students. It's exciting to see people's lives changed, their children returning to health, and more and more families switching to nutrient-dense sustainable foods from local farms. If you're in NYC you can have my delicious traditional foods delivered every week! See www.OliverWestonCompany.com. For private cooking lessons and nutrition consultations please see www.EarthBodyBalance.com.